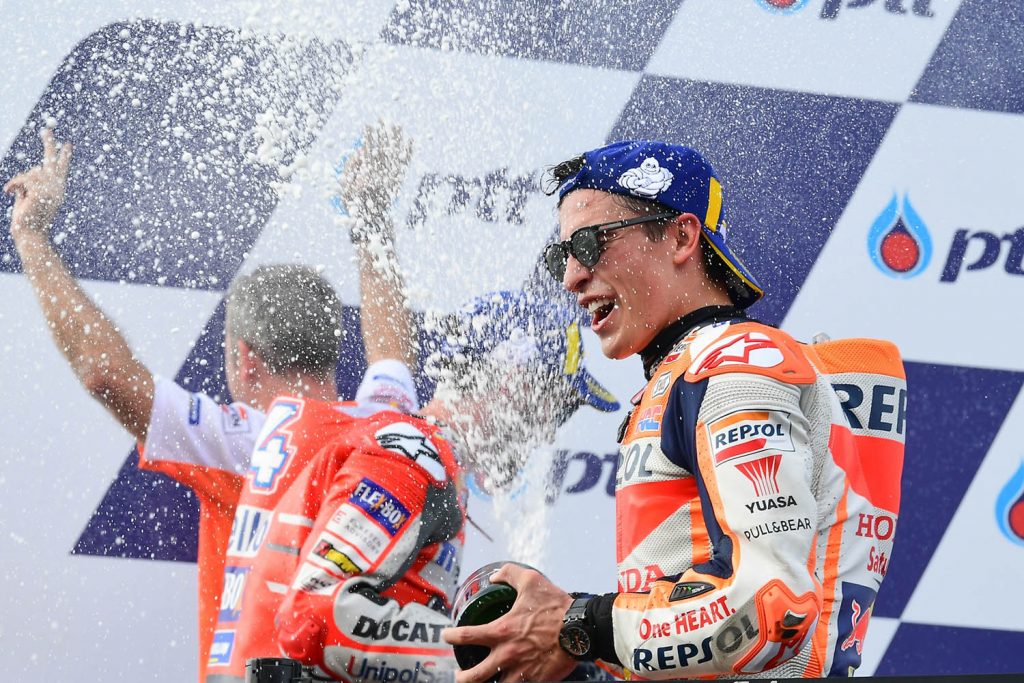 The Kingdom of Thailand put itself in a sporting spotlight over the weekend, drawing more than 220,000 paying spectators and close to 800m TV viewers worldwide to a hitherto little-known rural town, 400km from Bangkok. It was a huge success that can be put down to inspired management of successful circuit, government and corporate partnerships and a policy of local community inclusion that is characteristic of the growing economic and social success of Buriram in recent years. 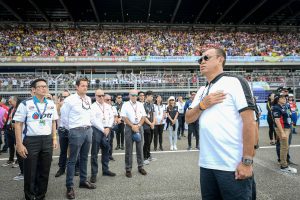 It was the realization of a dream envisioned by Buriram-based entrepreneur and former politician, Nevin Chidchob, five years ago, when he assigned race track designer, Hermann Tilke, the job of planning a circuit that would qualify as ‘Grade A’ according to the governing bodies of two-wheeled and four-wheeled motorsports and therefore enable MotoGP and Formula One to race there.

It took just one year the bring Chang International Circuit from the drawing board to a real, functioning motorsports venue. It opened in October 2014. A few months later, in March 2015, the Asia Road Racing Championship (ARRC) and World Superbike Championship held a round at the circuit. Good working relationships were forged quickly between track staff and promoters, TWMR and Dorna Sports and both events, particularly World Superbike, drew large crowds to the track. The production-based world championship will return to Buriram for the fifth time in March 2019, while ARRC will make its eighth visit at the end of November. The circuit organiser, BRIC, also has its own four-round superbike championship, which helps to keep the team’s race day skills sharp. There has been plenty of car racing too, about which this writer has insufficient knowledge to comment.

As with any daring new project, there were plenty of knockers and naysayers, every one of which should now be tucking into generous portions of Humble Pie with extra clotted cream. The team Khun Nevin appointed to push his vision forward were smart enough to understand the scale and scope of the challenges and put practical solutions in place for all of them. As an FIM official as well as a journalist I have been at Chang International frequently enough to have a good view of how they worked through each issue.

Until the deal with Dorna was signed 14 months ago at the Sports Authority of Thailand, the most often deployed – and most irritating – argument was that Buriram was too far from Bangkok for MotoGP to go there. It ignored, not only that World Superbike and ARRC were regular, satisfied customers, but that the core of the series in Europe moves from country to country for each round. I am glad that I gave my views in early 2017 on the subject in an interview on the circuit’s TV channel. Dorna also knew well enough that the BRIC organisation and staff were among the best in the world, so going to Chang International carried very little uncertainty, as they looked to increase their exposure to South East Asia. Thailand’s Ministry of Sports and Tourism joined with Thailand’s part state-owned oil giant, PTT, to seal the deal which committed MotoGP to holding a round at Chang International for three years from 2018 – 2020. With that objection dealt with, the negative voices focused on Buriram’s relative scarcity of hotel rooms. As the moaners did what they do best, the BRIC team encouraged the construction of new hotels and collaborated with hoteliers in neighbouring cities, such as Surin and Korat.

There was a distinct Buriram masterstroke that helped to meet the accommodation and transport challenges, as local farmers and homeowners were mobilised to provide shuttle transport, camp sites and Airbnb style room rental to visitors. This distinct, inclusive approach, meant that most of Buriram’s population was involved in, and benefited from, the Big Show that came to town. It also gave the event a uniquely Thai charm.

Transport was provided by scores of farm trucks, branded ‘Shuttle Tans’ by Khun Nevin, that Thai and foreign visitors alike happily jumped in to get from one part of the circuit complex to another.

I found homestay accommodation around 12km (a 10 minute motorcycle ride on what were clear roads, even on race day) for 650 baht (US$20) a night. I am glad I did. My room was comfortable and my hosts, Supanee and Pushit, were delightful, hospitable and went to great lengths to make sure I and the Brazilian couple staying in the same house, had everything we needed and more. As Supanee’s sisters and the local village head dropped in with gifts of food and drink, we literally became part of the family. 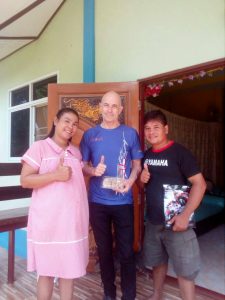 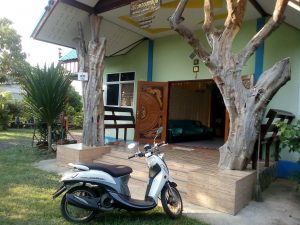 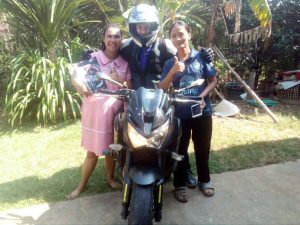 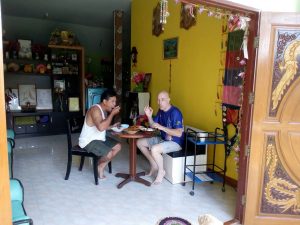 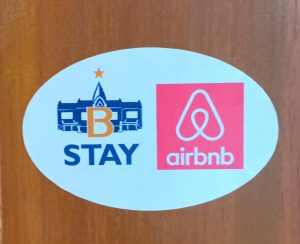 MotoGP will have made a lasting impact on this family. As you can see in the photographs, Supanee is seven months pregnant and told me, as I was leaving on Monday, that they will give the nickname ‘Marc’ to their baby boy.

As I trundled through the circuit entrance at 09:00 on Sunday, the sights, sounds, colours and sheer numbers of people around me made the hairs on my arms stand on end.

I took a few ‘Shuttle Tan’ trips to various grandstands, chatting with friends I bumped into and various strangers who were happy to chat. The Thai people there were clearly proud and excited about what was happening in front of their eyes. Foreign fans, being used to the queues and crushes of European grands prix were unanimously effusive.

Gerard, who was sitting in the sun with with three friends from the Netherlands and only an ice bucket of beer for protection, told me. “We came for MotoGP, but will also go to Phuket on Monday for a week’s holiday while we are here. It is the first time in Thailand for all of us. The facilities here are fantastic and food and drink at is excellent at normal prices. The people here are so welcoming and we are having such a good time that we will come back for sure with a bigger group next year!”

Jerome and Linda from South Africa told me, “We came for MotoGP, but will go to the islands for a few days. We love it here. The people, the food and, of course, the racing, are awesome.”

An Australian friend, Rod Simpson, who is a top-level Bangkok-based hotelier, commented, “Buriram did an amazing job and the weekend has been superb. The racing topped it off and I was happy to see so many Thais there. I booked my accommodation for next year before I left!”

It was a story repeated by almost every foreigner I spoke to, so Buriram can be assured that the estimated 50,000 overseas visitors will be a bigger number in 2019.

I too was caught up in the euphoria to the extent that I had to think hard when ARESSP asked me to state things that could be improved. The BRIC team will no doubt have a longer list than me, but I did see the potential to move traffic more quickly into the circuit, by opening all entrances and also heard comments that the podium was not grand enough for MotoGP. The latter is a tricky one because of the venue’s stadium style design, which places the main grandstand above pit lane, thereby forcing the podium to the inside of the track. 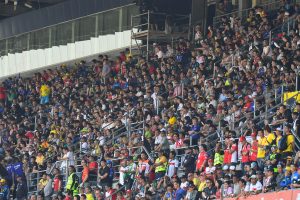 Finally, it was a surprise to me that the track-side commentary was only in Thai, as Dorna supplied an English language commentator for the World Superbike round in March. For spectators maybe watching a superscreen, or maybe not, this was the only apparent omission of any consequence.

Congratulations to BRIC, the Sports Authority of Thailand, PTT and to Buriram province: you surpassed expectations and made putting on Thailand’s biggest ever sporting show look easy!