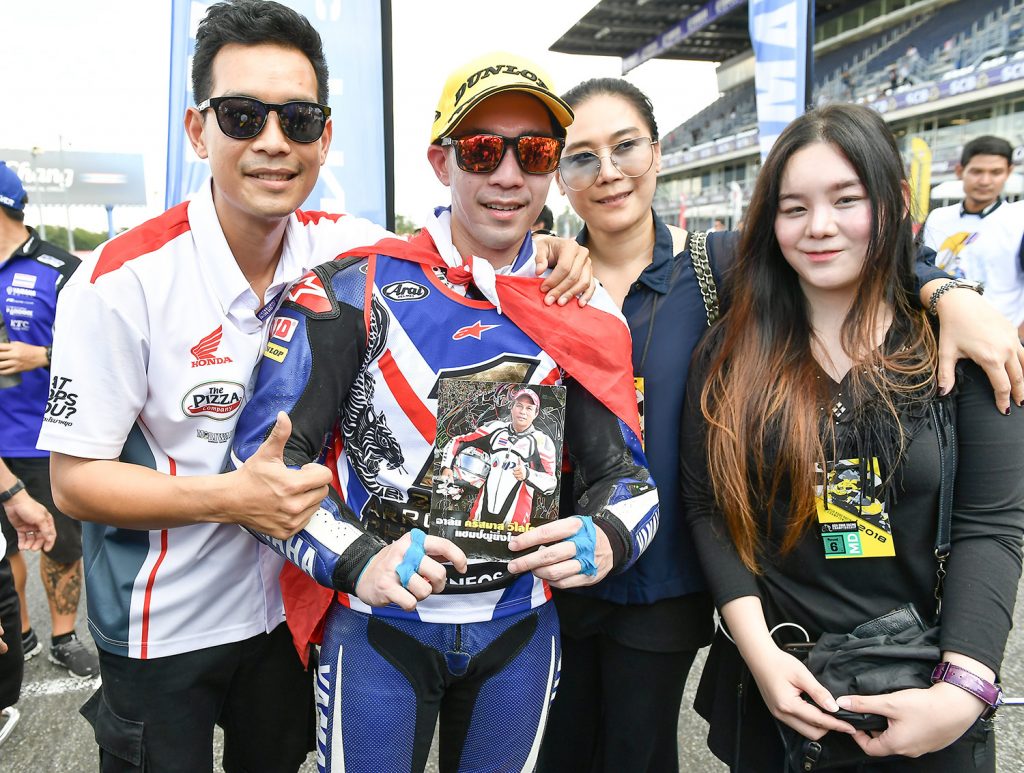 Before the 2018 ARRC Grand Finale began on Friday morning at Chang International Circuit, Ratthapong Wilairot’s challenge for the Supersport 600 title was a long shot, requiring a double win from a rider who had never climbed the top step of the podium in the series.

By the time free practice was over on Friday evening the odds had shortened after the Yamaha Thailand rider topped the time sheets for the day. Murmurs of a possible Thai champion for the first time since 2010 became audible after Ratthapong took a convincing pole position on Saturday morning and then the main topic of paddock conversation by the time he had won the first race.

At 15:35 on Sunday afternoon the job was done and emotion spilled over as Ratthapong Wilairot completed his first ever ARRC double win to claim the 2018 Supersport 600 title.

The achievement, coming on the eighth anniversary of the passing of his father, Christmas Wilairot, held profound significance for Ratthapong, who was joined by his brother, sister and mother, who held a photo of the late Thai racing legend.

There was a further elegance to proceedings, as it had been the last Thai ARRC Supersport champion, Decha Kraisart, who adopted the role of a protective older brother and shepherded his team-mate to the finish line in both races.

In a repeat of race one, Decha made a perfect launch from the middle of the front row and stretched away from title protagonists, Ratthapong and Yudhistira. A determined Azlan also made his way into contention, slotting into fifth, behind Keminth Kubo. Yudhistira briefly got ahead of Ratthapong, before the Thai rider got back in front and opened up a gap on the Kawasaki. Yudhistira subsequently fell into the clutches of Kubo, who engaged him while Ratthapong moved closer to Decha.

Azlan, chased by Koyama, closed in on the battle for third, passing Kubo, who fought back, only to low-side out of the contest on lap eight. Meanwhile, Decha gave way to his team-mate at the front to put him five points clear in the live standings; Yudhistira began to consolidate third place, as Koyama passed Azlan for fourth.

At the end of lap 12 and with one third race distance remaining, the gap between the blue duo at the front and Yudhistira was four seconds, who, in turn, had Koyama heading towards the rear of his Kawasaki. Decha looked as though he had the pace to win, but the more important job of helping Ratthapong become the first Thai to win the title since he himself last claimed it in 2010, prevailed.

Yudhistira finish three seconds back from Decha, just holding off Koyama for third, while Azlan was fifth, a further 3.5 seconds in arrears.

With Muklada Sarapuech under a one race suspension after the previous day’s last corner pinball performance, it was left to Anuparb and Kritchaporn Kaewsonthi to fly the Thai tricolor in race two.

It was Anuparb who got the best start to lead Andy Fadly, Awhin Sanjaya, Kritchaporn and the rest of the field round to turn three. A brave move by Awhin into the fast turn four took him to the front, but there was little to choose between the first 11 riders.

2018 champion, Rheza Danica Ahrens, moved to the front at the start of lap two and Mario Suryo Aji came through to make sure that all three Astra Hondas were close to the front. For Yamaha Thailand, Anuparb and Peerapong Boonlert settled in the middle of the group together with Kritchaporn. The green of Andy Fadly’s Manual Tech KYT Kawasaki broke up the red and blue of the other leading machines.

As the last lap lottery began, Mario, Fadly, Awhin and Anuparb had a small gap back to Rheza, Kritchporn and Peerapong, who quickly closed back in by the time they reached turn five. As they braked for the final corner, Anuparb was forced onto the grass and lost just enough momentum for Awhin, Fadly and Kritchaporn to beat him to the line. Mario, Peerapong and Rheza were all within six tenths of the winner to complete the top seven positions. Five seconds further back, race one winner, Rafid Topan Sucipto, held off Galang Hendra Pratama and Kanatat Jaiman for eighth place.

Race Direction subsequently intervened to penalise Awhin, Kritchaporn, Peerapong and Mario by dropping them five places each for exceeding track limits. That handed Fadly his first win and brought Rheza and Anuparb up to second and third places.

Rheza’s total points haul for the year increased to 226 and Anuparb held onto second place in the standings with 158 points from Rafid, who finished with 151.

Astra Honda were confirmed as the 2018 team champions for the second year in succession. Full results here.

There was plenty of anticipation ahead of Underbone race two, with Indonesian eyes especially on rising star, Wawan Wello.

Starting from pole, Wawan again out-dragged the rest of the field into turn one and briefly opened a gap until a hungry peloton pulled him back in on the long straight between turns three and four. Newly crowned champion, Helmi Azman, along with Syahrul Amin, Ahmad Fazli Sham, Peerapong Luiboonpeng and Akid Aziz hounded the Indonesian upstart, forcing him back into the middle of the leading group by lap three.

Clearly believing in his right to lead the race, Wawan had charged back to the front one lap later, as his SND team-mates, Gupita and Syahrul, along with Helmi, Akid and Fazli Sham stayed close, trying to work out a way past the wild card overachiever. 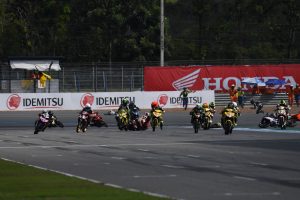 As is often the case at the Thai circuit, the last corner played a major role in the finishing order. After leading much of the final lap, Wawan got caught in the melee as the leaders fanned out and squashed their front Dunlops into the asphalt. Peerapong clipped Akid, sending both bikes down and forcing those around them to take avoiding action. As the chaos cleared, Syahrul was the first to the chequered flag, one tenth ahead of Gupita who was chased across the line by Fazli Sham. Travis Hall and Fakhrusy also went down, leaving Helmi Azman as the sole SCK Rapido finisher in sixth place, just ahead of Wawan and behind Aiman Azman and McKinley Kyle Paz, who finished fourth and fifth.

With Helmi Azman having been crowned as champion the previous day, Izzat Zaidi’s 10th place was enough to confirm him as second in the overall standings, with 130 points from Team ONEXOX TKKR’s Ahmad Fazli Sham. 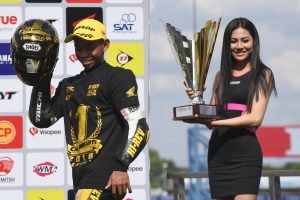 Smiling even more broadly than usual, Helmi Azman confirmed that he will remain with SCK to contest the Supersport 600 championship in 2019. Full results here.