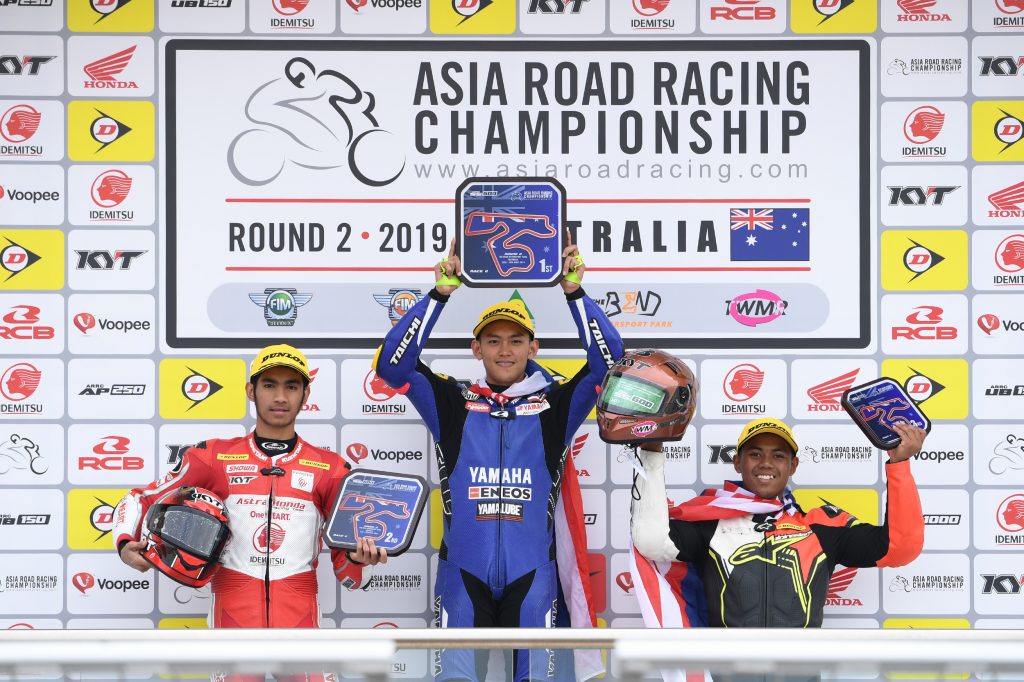 It was the second visit to Australia for Asia’s premier motorcycle racing series. On the same weekend in 2018, ARRC gave the circuit its first ever international event and was so successful that it became established as an annual fixture. This year it was billed as The Bend’s International MotoFest and featured numerous supporting events, with parties, exhibitions and even drag racing. I was at the event to work on TV commentary with former World Superbike racer and World Endurance champion, Steve Martin, and to provide support to Australian media outlets about the Asian series.

There were 13 Thai riders in the three ARRC classes who made the trip to Australia. Missing from that number was Kawasaki Thailand’s ‘Tingnote’ Thitipong Warakorn, who led the Asian Superbike class after round one after two brilliant second places in Sepang at the beginning of March. Tingnote suffered back and chest injuries just one week later in Buriram, where he was competing as a wild card in the World Superbike race there. 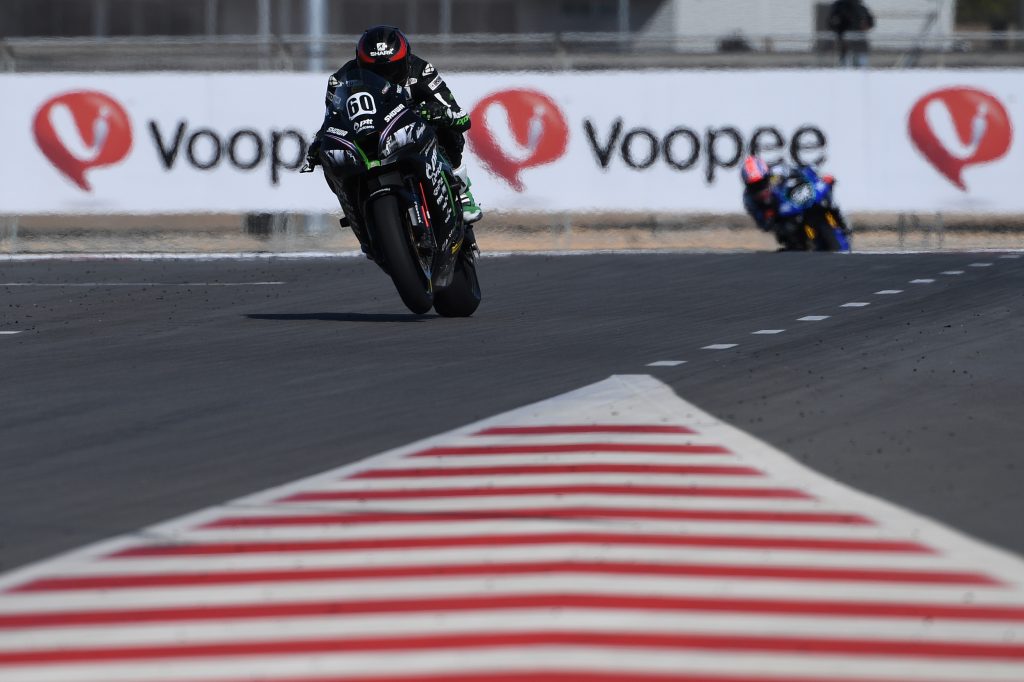 Tingnote was replaced by Kawasaki’s Australian star, Bryan Staring, for this round, so he lined up with regular rider, Chaiwichit Nisakul. Apiwat Wongthananon and 2018 Supersport 600 champion, Ratthapong Wilairot were there for Yamaha Thailand.

Practice and qualifying were dominated by Bryan and another Australian, Broc Parkes, who is riding for Yamaha ASEAN this season. In the end Parkes took pole position, with Bryan second. Apiwat joined them on the front row, while Ratthapong and Chaiwichit qualified eighth and ninth respectively.

Bryan led off the line for Kawasaki Thailand, chased by Parkes and Apiwat, whose challenge faded on lap three and he fell back into the chasing pack, being passed by Malaysia’s Zaqwan Zaidi and Azlan Shah and Japan’s Yuki Ito. Parkes got ahead of Bryan and the pace of the two Australians took them away from the rest of the field.

As tyre wear became a factor, Bryan got ahead of Broc Parkes and pulled clear to win by more than two seconds for Kawasaki Thailand. Behind them, Yuki Ito got the better of Zaqwan to finish third. Azlan was 2.5 seconds further back in fifth, in front of Apiwat, Ratthapong and Indonesia’s Ahmad Yudhistira. Chaiwichit finished ninth.

Bryan again got the holeshot to lead from the start in Sunday’s race two, chased by Apiwat and Broc Parkes and these three broke away at the front. This time Apiwat sustained his challenge until half distance before once again dropping back behind Ito, Zaqwan and Azlan.

Parkes managed his tyres much better this time and took the lead on lap 10. This time Bryan had no answer, but held on to finish less than half a second behind. Ito claimed another third place, while Azlan improved to fourth in front of Zaqwan. The finishing positions from sixth to ninth were the same, with Apiwat and Ratthapong sixth and seventh, Yudhistira eighth and Chaiwichit in ninth.

Apiwat commented, “This R1 is completely different to the R1 I rode in the Thailand championships three or four years ago. The way it delivers its power, the electronics and the handling are all things I am learning about. I am getting better and believe I will be able to fight for first place soon!”

Ratthapong added, “This is the first season for me to ride with 1,000cc and I am getting used to the power and electronics. I think I can improve step-by-step.”

In the championship standings, Tingnote’s absence and the results of Broc Parkes mean that the Australian leads the table with 72 points. Apiwat is now sixth on 44, Tingnote slips to seventh with 40 and Ratthapong is eighth with 34. Chaiwichit has 14 points and sits in 12th position. 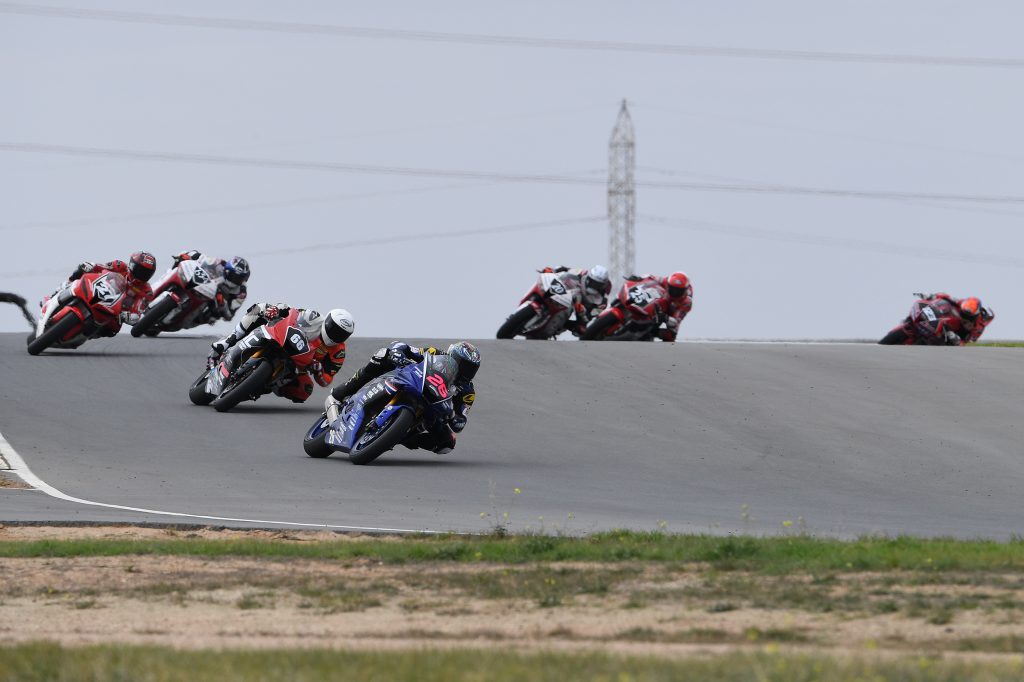 Yamaha Thailand’s Peerapong Boonlert arrived in Australia with a perfect score of 50 points, after winning both races in round one at Sepang. In practice and qualifying he was again the rider to beat until Malaysia’s Ibrahim Norrodin, standing in for his older brother, Adam, put in a stunning lap of 1:56.580 to go top by three tenths of a second in the last few minutes of the session. As Peerapong responded, Ibrahim crashed, which brought out the red flag, leaving Peerapong to start from the middle of the front row ahead of Musashi Boon Siew Honda’s Azroy Anuar. 2018 AP 250 champion, Rheza Danica Ahrens, Underbone 150 champion, Helmi Azman and Andi Farid Izdihar made up row two.

Peerapong led from the start and immediately opened a gap on his rivals, who were left to fight for second place. Spectators and viewers were treated to an enthralling battle between Ibrahim, Azroy and Victor Racing’s Spanish newcomer, Javier Malloy.

Peerapong rode a perfect race to take his third win in a row by almost four seconds. Javier won the battle behind to finish second from Azroy and Ibrahim. Afif was fifth from Passawit, Andy Farid, Rheza and Kritchaporn, who was ninth. The unfortunate Helmi suffered his second highside of the weekend, which ended his podium challenge. 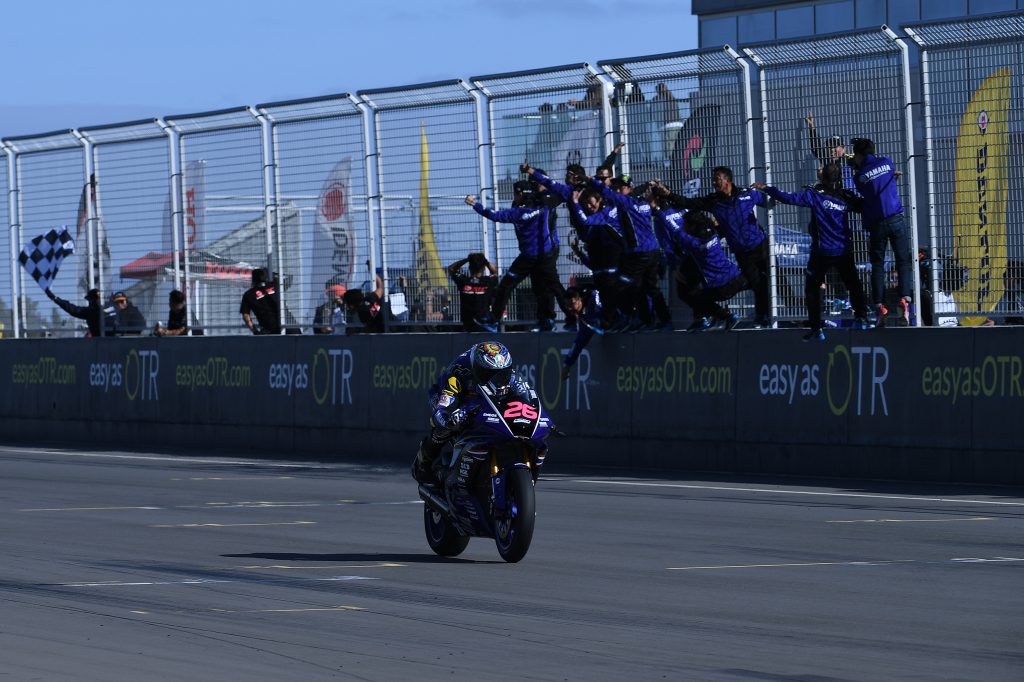 Peerapong just got the holeshot at the start and tried to break away. This time, however, the injured Helmi chased him hard, before he was passed by Ibrahim, who was recovering from an indifferent start. Kritchporn collided with Javier on the first lap and took no further part in the race.

Peerapong didn’t flinch under the pressure and kept going as Ibrahim tried to find a way to get close enough to pass, only to find himself increasingly engaged in a battle with Andi for second place. The leader stretched his margin over the last two laps to finish almost a second clear of Andi, who won the contest for P2, while Ibrahim took third from the impressive Arif. Azroy was sixth and Helmi, Passawit, Rheza, Fakhrusy and Akid Aziz completed the top ten.

Peerapong’s four-from-four give him a perfect score after two rounds of 100 points, which is a margin of 51 over his nearest rival, Andi Farid Izdihar. With the next round at the leader’s home track in Buriram, a straight six is easily foreseeable. 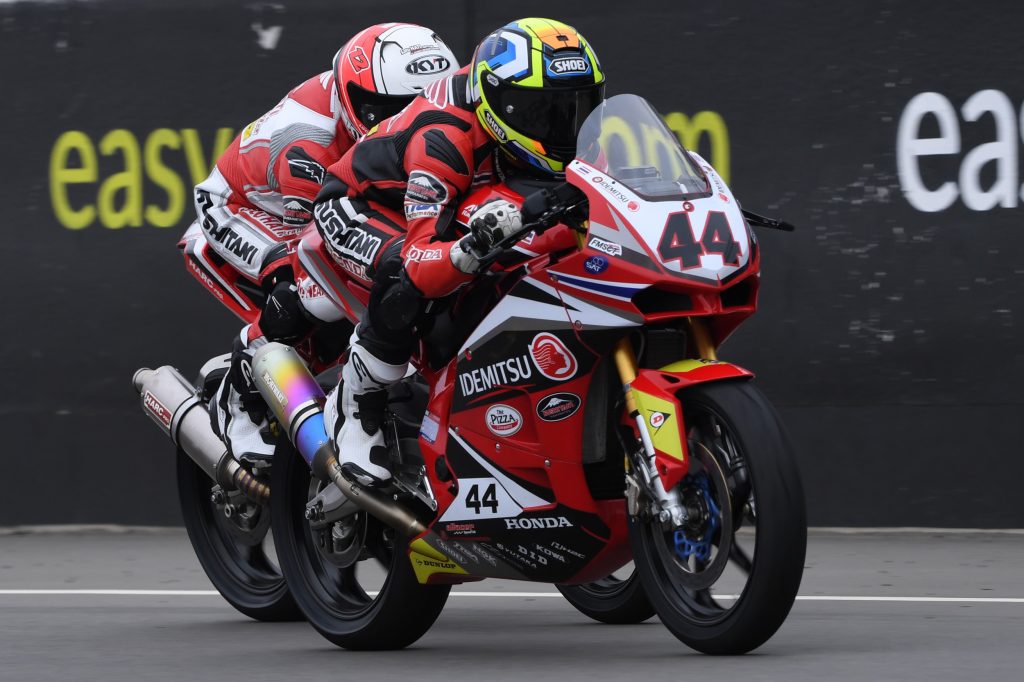 Practice and qualifying was all about three riders who were setting the pace: the two Manual Tech KYT Kawasakis of Indonesia’s Andy Fadly and Japan’s Aiki Iyoshi and AP Honda Racing Thailand’s Muklada Sarapuech.

At the end of qualifying, it was Fadly who claimed pole position from Iyoshi, with Muklada completing the front row. The Thai rider was almost half a second faster than Astra Honda’s Awhin Sanjaya, who led the second row from Reynaldo Ratukore. Muklada’s team-mates, Piyawat Patoomyos and Tatchakorn Buasri were next, in sixth and seventh places on the grid.

Yamaha Thailand are running two rookies in the class for 2019, Suttipat Patchaeetron and Sawapol Nillapong, while BRP Racing are running two British-Thai brothers from Buriram, Kevin and Stewart Johnson.

Sure enough, the three front row qualifiers got away from the rest of the field at the start, while Tatchakorn and Piyawat were involved in a five-way battle for fourth.

At the start of the final lap, Muklada was leading and appeared to have an edge on the two Kawasakis until a slight mistake put her in third place as the three flashed across the finish line. More than 10 seconds further back, Tatchakorn Buasri was fourth from Reynaldo Ratukore and Piyawat Patoomyos. 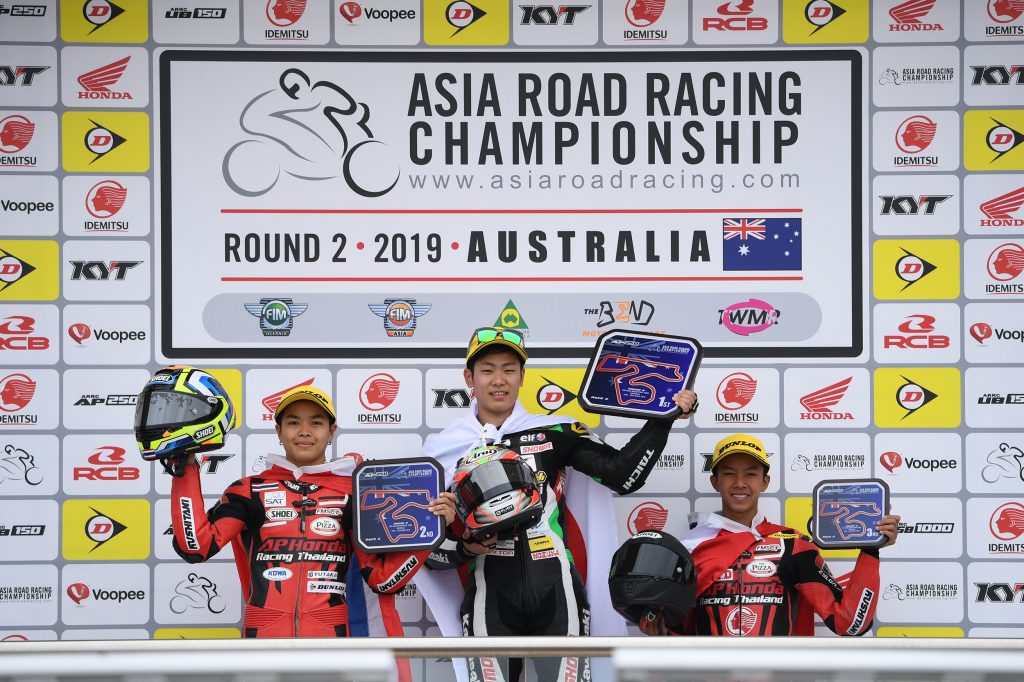 Sunday’s race began with a shock, as Fadly crashed out, unhurt, at turn one on the opening lap.

The Malaysian’s early exit left AP Honda team-mates, Tatchakorn and Muklada battling for the lead with Iyoshi and ONEXOX TKKR’s Yamaha-mounted pairing of Rey Ratukore and Izzat Bahauddin, until Izzat dropped back after an off-track excursion. Astra Honda pairing, Lucky Hendriansya and Irfan Ardiansyah moved up to join the fun at the front.

In the final few laps Iyoshi got himself to the front of the group and engaged Mukalda and Tatchakorn in a contest for first place. As it became clear that the pace of the Kawasaki was beyond the following Hondas, the Japanese rookie consolidated a lead of a few bike lengths as Muklada, despite struggling with a worsening chatter problem, kept unrelenting pressure on the race leader.

The jubilant Japanese took the chequered flag by a margin of more than a second from Muklada, who had a similar gap back to Tatchakorn. Fourth place went to Astra Honda’s Lucky, who had a 4.5 second buffer back to Rey Ratukore, who was again the best of the Yamaha riders. Irfan Ardiansyah was sixth from Awhin Sanjaya, Izzat, Piyawat and Muzzakir who was tenth.

It was Aiki Iyoshi’s maiden win and has earned him the championship lead with a points total of 68. Fadly is second on 65 and Muklada is third.

The next round of the Asia Road Racing Championship will be at Chang International Circuit from 31st May to 2nd June.